[Full disclosure: I posted this review in August 2013. As of January 2014, I have started working for Hutch Games, partly because I loved this game so much. Given the chronology (and lack of influence this blog actually has), you can see that this should be objective review, but I’ll let you be the judge of that!]

Succinct and factual contextual opener: Smash Cops Heat (iOS | Android) is the free-to-play incarnation of the original Smash Cops (iOS only) by Hutch.

The game involves chasing down criminal vehicles and “arresting” them (or as below, cautioning illegally parked cars) by repeatedly ramming them until they blow up. So, the theme is clearly compelling. 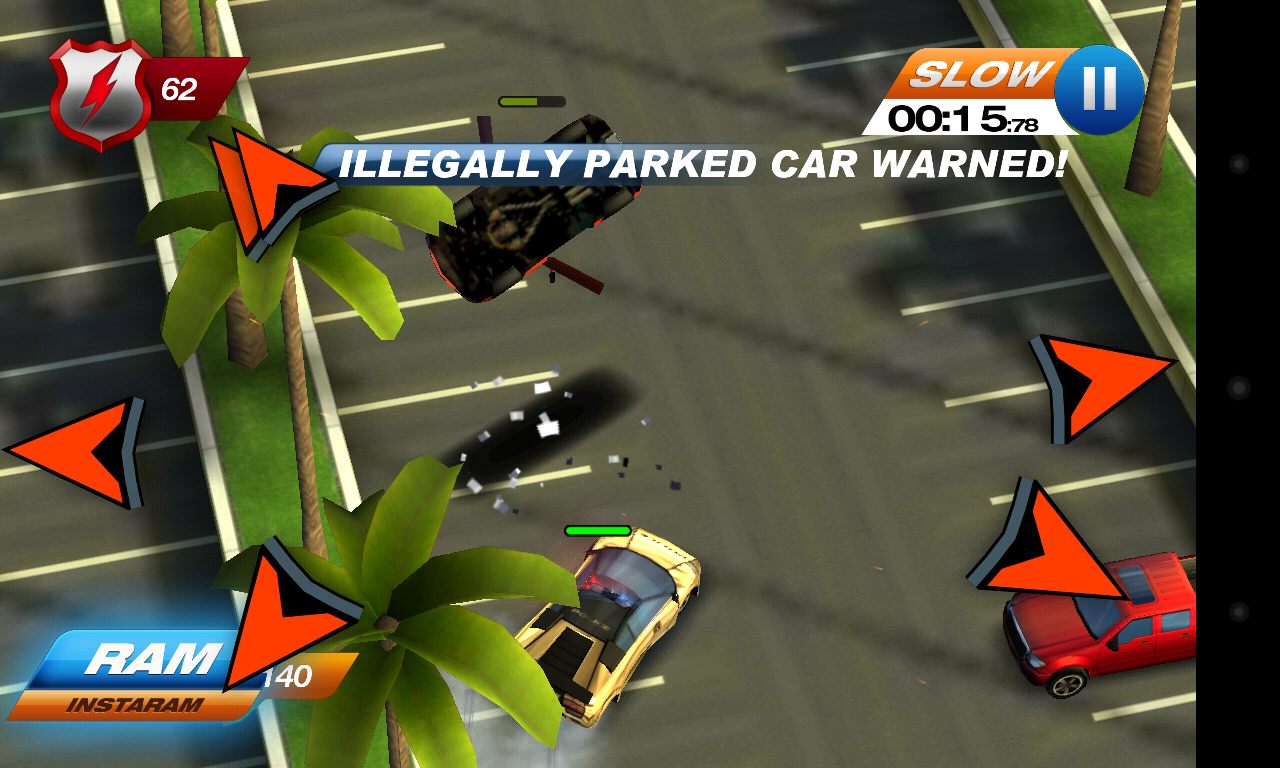 In terms of controls, there’s something rather innovative happening: wherever you put your thumb on the screen, your vehicle will try to drive away from it. This leaves your other thumb free to hit the RAM button which will give you a brief burst of speed, which, if you were so moved, you could use to smash into another vehicle to assist with an arrest. And this turns out to be rather brilliant, with a nice learning curve and the potential to develop a lot of skill.

On top of all that, the game is free. Free!

But of course at this point, even if you’ve bought into the above, this freeness does mean some alarm bells start ringing. The criticism levelled at many free-to-play skill games is that as you progress, they try to slowly turn into a ‘pay to win’ game without you noticingby ramping up the difficulty to the point where paid power-ups are the only way to progress.

In theory, Smash Cops Heat is doing exactly this. It does offer you things you can buy to make it a little easier, and ramps up the difficulty with periodic gates to new content. But it’s actually fine. I’ll explain why I think it’s fine later, but first, here’s how the paying bit works.

Things to buy
That RAM button takes a little while to recharge, but at the start of the game you are given a small number of ‘Instarams’, which you use by hitting the RAM button while it is in a recharging state (which is therefore very tempting to do). You’re also given some ‘SuperCops’, deployed by hitting another button, that will make your vehicle practically invincible and a little faster for a short time.

Once per day you are given 4 Instarams and 2 Supercops, and you can of course also buy these power-ups in much larger quantities. So, the scene is set for ‘buy to win’.

Difficulty ramp / gating
When you complete each level you get a star rating out of 5. Later groups of levels are only unlocked when you achieve a certain cumulative total number of stars. But more compellingly, better vehicles are unlocked for achieving certain (different) numbers of stars.

Therefore, if you’re a few stars shy of unlocking a new vehicle, maybe you want to use some Instarams and Supercops to get there, and then the new, better vehicle will let you achieve more stars – and so unlock more levels.

What actually happens
Despite the above, what really matters is just how difficult the levels get (against your own skill at the game), and just how many Instarams and Supercops you need, given that you get a small number for free each day.

To their credit, Hutch have actively been updating and optimising the game: the difficulty curve is pretty smooth (at least for the first 2/3 of the game), and the duration of Supercops and power of Instrams  was even increased by around 50% in an update that came mid-way through my playthrough.

As such, with some effort, I was ultimately able to achieve the maximum star rating for all the levels, without paying for any additional power-ups. The game is therefore definitely not buy-to-win – it’s at least possible, albeit not easy, to do everything without paying.

Incidentally, since I was getting a huge amount of fun out of it, I went ahead and paid for some of the cosmetic upgrades as a way to show appreciation to the developers. In particular, I went for the gold chrome skin, which is twice as expensive as the other skins, but as you can see is much more than twice as good:

Difficulty curve: the three phases
My playthrough experience had three very distinct phases in which the experience of playing the game was quite different. These were as follows:

As I said, I got by using only the Instarams and Supercops given for free once a day. Someone less patient than me might prefer to buy them – my complete playthrough took about 2 months playing a little each day, and I practiced some of the later levels extensively to find out the smallest number of power-ups possible. Alternatively, someone more skilled than me might need fewer of these power-ups to begin with!

Overall, I’d highly recommend it as one of the best mobile games I’ve played. It involves real skill, has an enjoyable learning curve, and is balanced in such a way that you don’t have to buy the power-ups if you’re prepared to take the time to improve your skills and strategies. Perhaps most importantly, doing so felt like a real achievement (unlike finishing a lot of mobile games), to the point where I feel more proud of these pixels than is sensible: 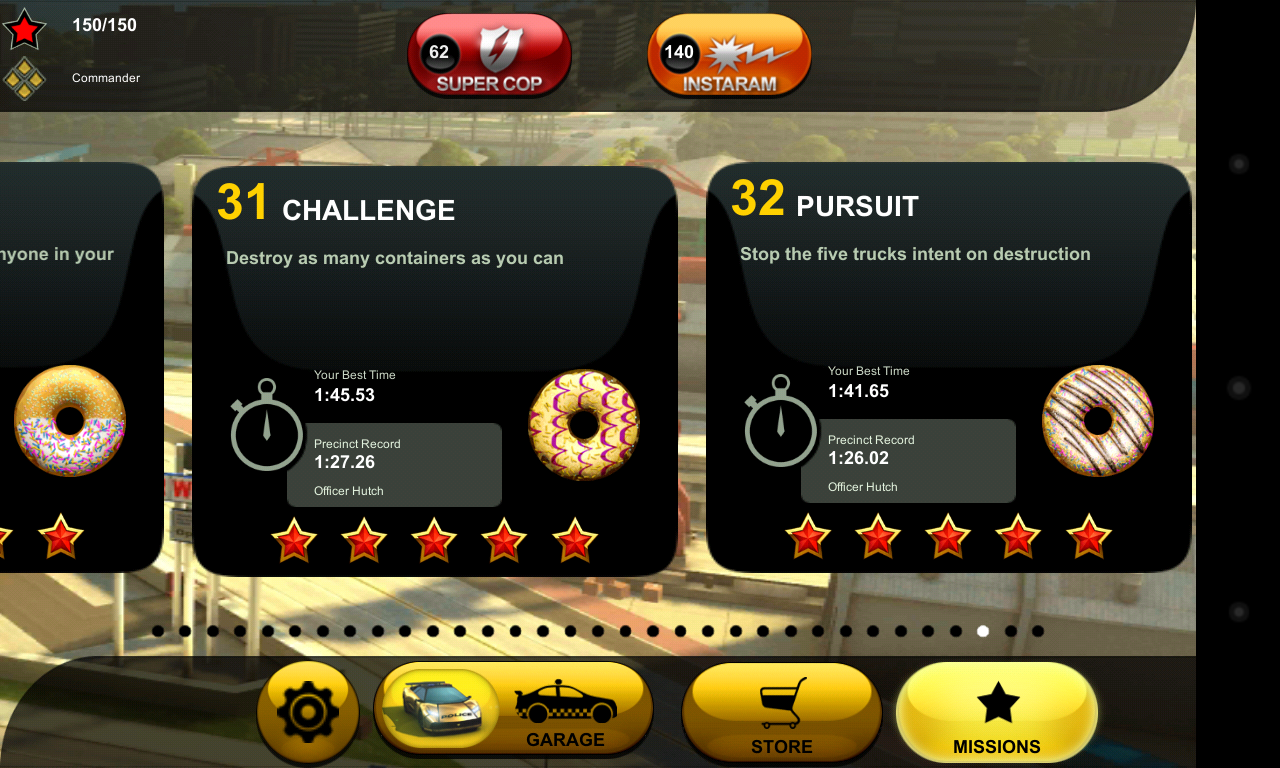 [Full disclosure: I posted this review in August 2013. As of January 2014, I have started working for Hutch Games, partly because I loved this game so much. Given the chronology (and lack of influence this blog actually has), you can see that this should be objective review, but I’ll let you be the judge of that!]

[…] Mannveille tweets as @metatim, and previously raved about Smash Cops Heat for […]